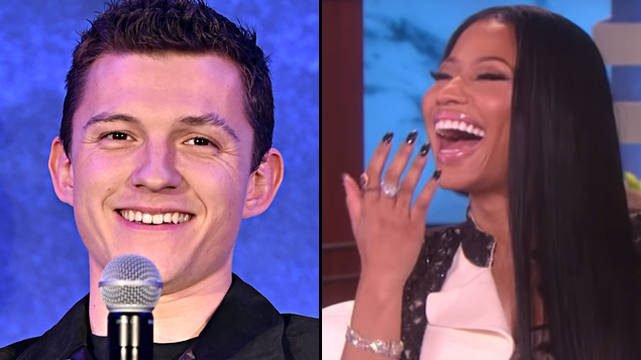 Remember the ‘Nicki Minaj is pregnant with Tom Holland’s baby’ memes? Tom Holland has seen them too…

Tom Holland is known for many things. His talent, his humour, his penchant for revealing a spoiler or two about the MCU and most importantly, his fictional relationship with Nicki Minaj.

Back in 2019, a meme went viral on Twitter that jokingly said Tom was in a relationship with Nicki, and that they were having a baby together. To this day, it’s still one of the funniest Tom Holland memes that the internet has ever blessed us with, but Tom had never addressed it… Until now.

While diving into important moments in his career in a new interview with Esquire, Tom finally spoke about the legendary meme, and his response was the most Tom Holland response you could ever imagine.

“This actually really stressed me out, and then I saw it was Nicki Minaj,” he said. “And then I realised I’ve never met Nicki Minaj. So that was a big relief for me because I’m not ready to have kids.”

How did the Tom Holland and Nicki Minaj meme start?

Charli D'Amelio's nickname for Landon Barker has just been revealed.In honor of her boyfriend's birthday, the TikToker shared a series of photos of the couple...

TikTok: Who Is Alix Earle's Mom? They Look So Much Alike – Distractify

ShareThe Racine Police Department released body camera video from a fatal officer-involved shooting. No criminal charges will be filed against the officer.RACINE, Wis. –...

The girl is a fan of a good braless look!Do you have that one super-risqué top in your wardrobe that’s bound to get you...

Developers2 days ago
We use cookies on our website to give you the most relevant experience by remembering your preferences and repeat visits. By clicking “Accept All”, you consent to the use of ALL the cookies. However, you may visit "Cookie Settings" to provide a controlled consent.
Cookie SettingsAccept All
Manage consent